My Facebook page has been an interesting place the last few years. I have been deleted and blocked more times than I can count. I have been “challenged” for my posts and opinions. I have been called racist. (Yeah, that’s funny) I have been called out of my name so many times, I have grown to understand that it isn’t me, it’s the ignorance of others who choose to stay in their comfortable place.

Amazingly, I recently got to spend an evening with educator and lecturer, Jane Elliott, known for her “Brown Eyes/Blue Eyes” experiment with children that focuses on superiority and discrimination.

Before the lecture began, Jane scanned the crowd and noticed my friend and I had our notebooks out, ready to take notes of key points. She approached and asked if I would help participate in her lecture. Without hesitation, I agreed, briefly remembering how some of her videos left people in tears. 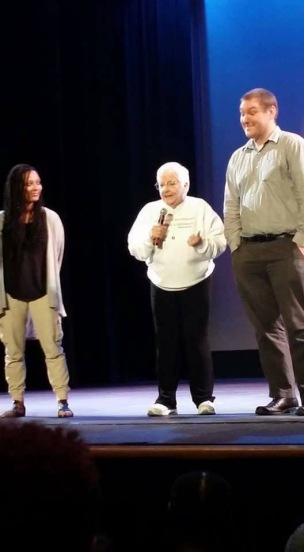 On stage, I was partnered with Dan, a tall white man where we were both questioned whether our height, age, gender and eventually race mattered when we left our homes in the mornings. Each times, scenarios were painted where our differences would matter. But why? Why with my education, experience, struggles, and ability to cope in certain times should Dan be more qualified than me? What skills would make him more qualified other than being a tall, white man?

Dan was a good sport. He understood his advantages and seemingly felt it was unfair. To speak of our current Presidency, the levels of perfection President Obama had to be is unparalleled to what we have now. What skills, experience, qualifications does 45 have to allow him this opportunity other than being a white man? Remember when President Obama had to disassociate himself from his own preacher because that was potentially damaging to his Presidential chances? 45 is an admitted sexual assaulter. He is a bigot who has surrounded himself with bigots. He has a history of well documented racial discrimination suits. This is an example of the realization that took place on that stage.

The room was filled with diversity. As our history was presented to us through teachings of melanin, the globe, religion, African American inventions, and why we should want more than a “melting pot”, it was obvious some were uneasy with the knowledge being presented.

This is where I lost many Facebook friends over the years. Hometown folks, classmates, former soccer mom friends. Truth is a painful pill to digest. Jane is extremely in your face and forces you to confront your prejudices and bigotry. I admit, many of my posts and dialogue have been in your face and direct. When people aren’t ready to confront themselves, they usually turn the table on you. I’m ok with that because I’m not here for making others comfortable. I want to use my experiences, education and knowledge to continue making people uncomfortable until they are comfortable with equality.

Jane taught us to SEE color. She says “When you say to a person of color, ‘When I see you, I don’t see color, I see everyone the same’ think about that. You don’t have the right to say to a person, ‘I do not see you as you are; I want to see you as I would be more comfortable seeing you.” See me. 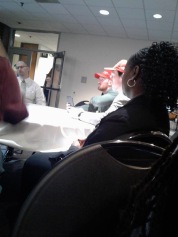 As the two young white men sat in the back of the room, waiting to speak with Jane at the reception, you couldn’t help but notice their “Make America Great Again” hats. Their arrogance and boldness of wearing those hats seemed to be a way of intimidation. They had questions, I had a listening ear and pulled up a seat right beside them. They had notes, resources and defiant responses. I felt like they could have been any classmate from my hometown or one of my son’s old basketball teammates. I respected that they had the courage to seek understanding, but they felt it was more important to justify treatment of black people because of the false notion that “black on black” crime means we don’t care about ourselves.

Understanding prejudice and bigotry is complicated. It is uncomfortable and frightening. To expect change, be change. I may not be able to change your attitude but I can challenge it. I think I’ll keep posting as I have been.

2 thoughts on “Ignorance Is A Choice”